Vote here for the top Dominican stars of all time, including Gary Sanchez and Edwin Encarnacion featured below on the final 25-man rosters we used once our AL Statis-Pro season went from 15 teams down to the final two - the Cleveland Indians and New York Yankees. See updates on all Statis-Pro playoffs by clicking here, (Note: Game highlights appear at the bottom, including the Dominican Republic's Edwin Encarnacion's Series MVP for leading the series in homers and runs scored to lead the Cleveland Indians to the World Series with a Game 7 win over the Yankees.).

To Play Any Team Yourself; 1) Click here for more than 800 Statis-Pro player cards for the 2018 season and how to play the game; 2, then get the five dice pictured in these instructions and; 3; follow the results on this free Statis-Pro game. On the player's on the link the number shows the highest number roll that equals that result, with the red number being the highest number on which the player homers.

Batter Cards: The average Statis-Pro batter card has a home run range of 27-32 (actually 4 out of 64 numbers since it is a base-8 system from 11-88), and has just ONE walk number. The Indians and Yankees powered their way through the season with much better cards. For example, Aaron not only has over twice as many home run numbers as typical (25-35 is NINE home run numbers), but the fact that he gets hits all the way up to 35 instead of 32 shows a high batting average, and he has 10 extra walks on his cards. Put it all together, and if a pitcher leaves the action on Judge's card he actually gets on base on a hit, walk, or hit by pitch mroe than half of the time (33 of 64 numbers).

We use the player cards calculated based on their 2017 stats, but the 2018 rosters. You will notice that the 5th hitter Andrew McCutcheon says "2017 Pittsburgh Pirates," while the 10th hitter (only starts against left-handed pitchers) Luke Voit was a 2017 St. Louis Cardinal I copied. 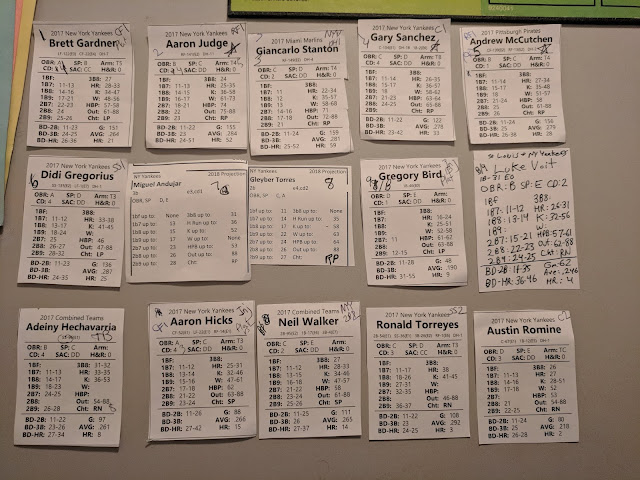 The new cards I made for rookie of the year candidates Andujar and Torres by entering the 2018 projected stats at mlb.com into this google sheet that anyone can use to make cards for new players.

You can follow the line-up reading from left to right and notice I write the number of their spot in the line-up, so the first batter with a "1" in the upper left is Brett Gardner, then "2" Aaron Judge is the second batter, and the second row starts with the "6" hitter Did Gregorius through the "9" hitter Bird. You may notice Bird has a "9/B" which I use to indicate he is the 9th hitter normally (against a right-handed pitcher, but the "/B" means he is on the bench against left-handed batters. Luke Voit has the reverse "B/9," meaning he is on the bench against right-handed pitching but starts as the 9th hitter against left-handed pitchers since left-handed hitters like Bird are automatically out on numbers of 11-15 against left-handed pitchers - so all his doubles would be turned to outs. The bottom row is all reserves for me, even though right now recent acquisition Hechavarria is actually starting at shortstop since Gregorius is out injured.

Half of the Cleveland Indians line-up is left-handed (four lefties and one switch-hitter). For this reason, I change their line-up a lot more when they face a lefty. As you can see Michael Brantley leads off but drops to 9th in the order against lefties (1/9), then Lindor bats 2nd against righties but moves up to leadoff against lefties, etc. Lonnie Chisenhall and Bradley Zimmer both start against righties (we do keep players in Statis-Pro action even when they are injured as long as they played some of the seasons), but Rajai Davis and Melky Cabrera start against lefties.

Perhaps the most important bench strength the Indians have over other teams is two speedsters off the bench that can pinch run or steal and take an extra base on a hit or fly ball. Davis has an OBR (on baserunning) and SP (base-stealing speed) of A, which led to the Game 5 win in the ACLS Statis-Pro series. Calculating the rookie card for Greg Allen - who is actually starting in centerfield due to Zimmer and Chisenhall are on the disabled list - is an even better A / AA. The SP: AA is the same as SP: A on most base-stealing efforts, but there are two exceptions. If Allen gets a single or double on his card, the automatically steals a base. In the dice version, he steals second base on a 1-4 instead of just a 1-3 like an SP: A. 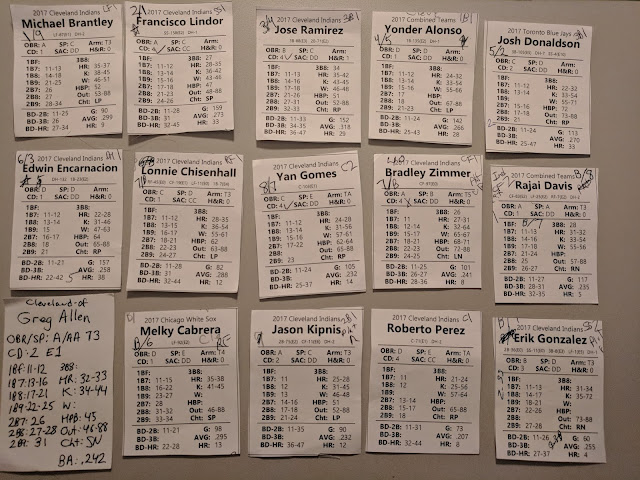 Like Judge, recent acquisition Josh Donaldson also has NINE home run numbers and with even more walks he reaches on just one fewer number than Judge - 32 out of 64. Judge is a little better because he has three more hits whereas Donaldson has two more walks - which don't score runners in scoring position, but Donaldson's card from last year is almost as good as Judge's from last year, so in the game they are virtually even.

Pitcher Cards: The average pitcher in baseball starts with a PB: 2-6, however, so typically a PB: 2-7 is a good starting pitcher and a PB: 2-8 is a strong relief pitcher who might close games or be a strong set-up man. However, the Yankees and Indians pack PB: 2-9 (the best, keeps action off batters' card 83% of the time).

Below we list the four starters in order with S1, S2, S3, S4 and then R1 for the top reliever or closer in the top row. Then the second row starts with the second best reliever (R2) etc. all the way to the 6th best reliever. Notice that I do use pitcher's in roles based on how good their card is, while others would use Cody Allen and Chapman as the closer even though their cards are not quite as good as some of the loaded middle relievers.

Here are the loaded Yankees, and Chad Green actually has the best card and David Robertson the second best, even though in real action Aroldis Chapman would be the closer once back off the DL. I accidentally put Happ before Severino in the photo, but as you see from the S1 Severino is actually the ace and first in the rotation. 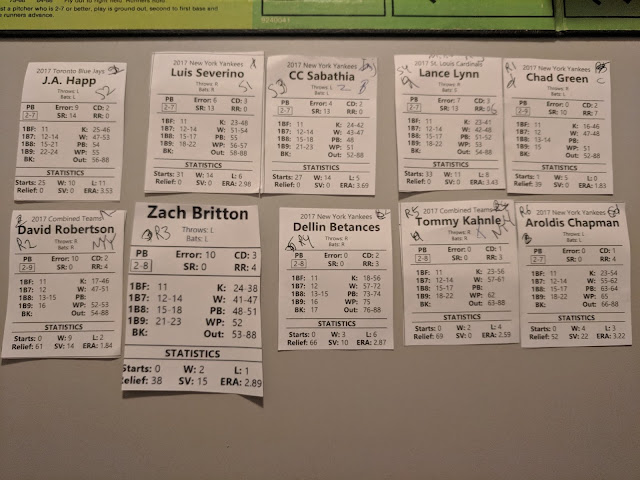 And here is the Indians incredible pen as they only team I ever remember with six relievers that are all either PB 2-9s and PB 2-8s.

Andrew Miller's PB2-9 with only 5 hits and three walks allowed, and the other 56 of 64 numbers resulting in outs, is the second best pitcher card in the AL behind only Boston's Craig Kimbrel (5 hits and 1 walk). That means that if Miller faces a left-handed batter and it is on the pitcher's card, the hits are all erased and the batters only three chances to reach are a walk on 48-52. However, the most impressive card in the league is Corey Kluber, because while he allows two more hits, he still only allows a baserunner to reach on eight of 64 numbers (one walk) and as a starting pitcher he can keep doing that for a complete game rather than just a couple of innings. 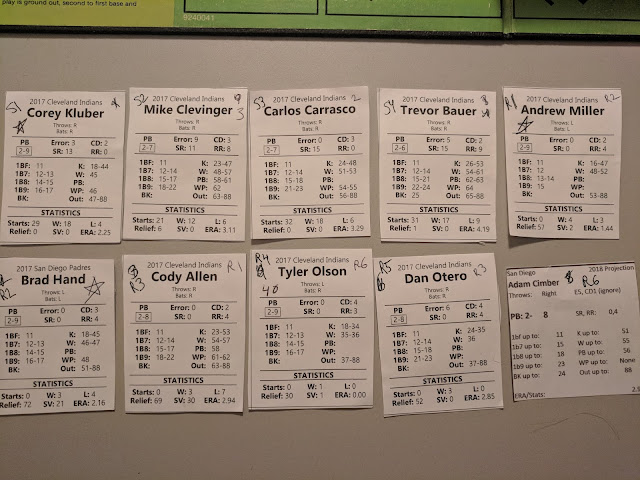 With both teams bringing in key players right up to the waiver line August 31, we did need to go back through and cut both rosters down to the 25-player legal limit. This did entail dropping some lesser players that are on both rosters because we allow players on DL to play and in some cases had to choose the better card between a current roster player and player on DL or suspension but who did play at least some this season.
Posted by JohnPudner at 6:08 PM