Click here for the free version of Statis-Pro plus the pitcher and batter cards for all 30 teams.

In addition to the main Statis-Pro playoffs, we wanted to try a simple single-elimination tournament using only the pictured dice and sheet to record results and what bases people are on, and the google sheet above with tabs using numbers based on this season for all batters and pitchers and additional tabs with instructions.

From the pitchers' tab I wrote down the pitcher's card numbers from the 2nd tab. For the Braves' starter, Foltynewicz allows hits up to a roll of 18, strikeouts up to 38, walks up to 48, the 51 on passed ball and 54 for wild pitches (passed ball and wild pitches are outs with no one on base). Most important, the first PB 2-7 means the two 6-sided dice keep it on his card. However, I recreated the roll from the first inning on which the 8 put the action on Yelich's line (see the bottom line on the sheet) and the 35 rolls on those dice fall within his 34-42 range for his 1st inning homer. 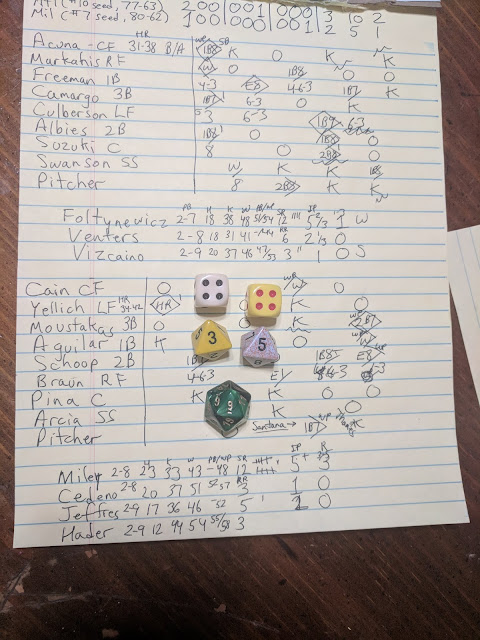 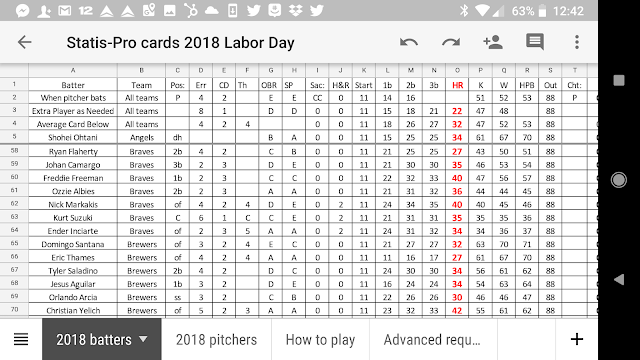 On outs the 4th tab and 20-sided die yield results. 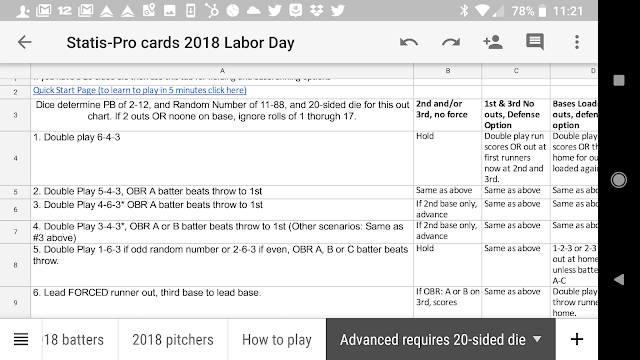 The 3rd tab has instructions for new players, but also has options for trying to steal bases, bunt, or take extra bases on hits. 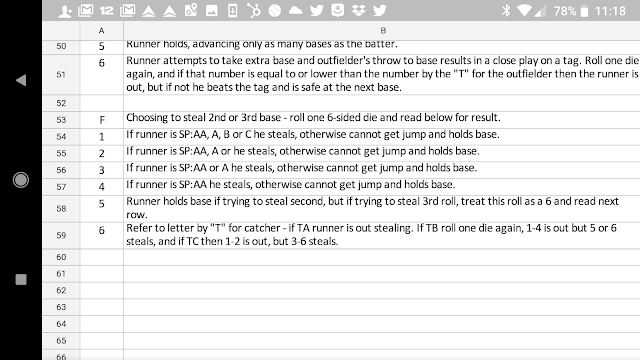 I played this Brewers-Braves games as a 1st test game using the Google sheet only. I seeded 12 teams for a single elimination to test if out and the Braves and Brewers batters were right by each other on the Google sheet which made it easier. Here is the quick tournamament bracket, where I seeded teams based on their actual mlb records right now.

Not that the Google sheet is set up with the top rows frozen, so anytime a pitchers comes up to hit those results are right at the top. When the pitcher is batting, you skip the PB and always get the results off his card. 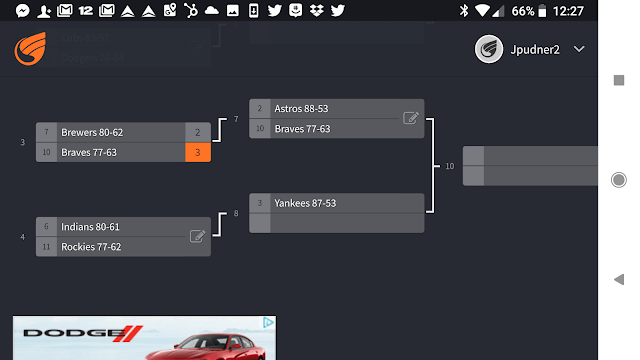 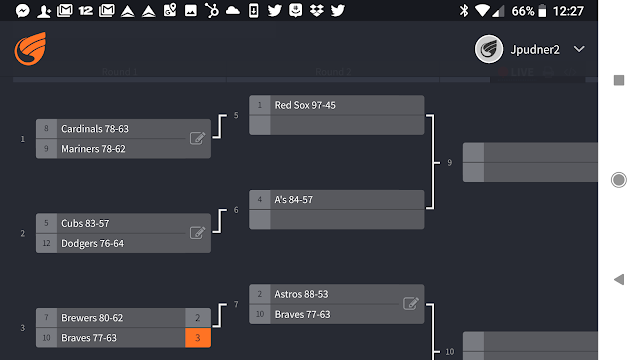 Sneak preview single elimination for the first look at 2018 player cards in simple dice version showed some interesting updates for players who will be better or worse next year. For example, the Yankees Stanton won the MVP in the big season based on his 2017 card and the Mariners' Cano was not far behind - however using the 2018 cards neither of them even starterd for their team.

Final Four. The Braves will meet the A's in the championship of the mini-sneak peak. In the first semifinal, The A's incredible bullpen came through for the second straight game - standing six Red Sox in the final three innings to hold onto a 2-1 win. Betts had two more hits, stole a base and scored, but the A's strung together three singles and two RBI sac flies in the fourth for the final margin. In the second semifinal, the Albies again led off with a double to spark a 3-run first inning and Jackson threw a 5-0 shutout to eliminate the Indians. In the battle of the two best bullpens in baseball, Freeman gave the Braves a 2-0 lead with a 1st inning homer, but Canha pulled the A's within 2-1 with a 3rd inning homer and Olson added a 2-run homer in the 5th to make it 3-1. The A's extended the eventual championship final to 6-2 by outhitting the Braves 11-5 and the top 2018 closer in the game, Trienen (PB2-9, hits only 11-16) wrapped it up for the win. Tournament champion Oakland A's.

6-seed Indians blow out 11-seed Rockies 7-0. With Bauer just as good as Kluber on the new cards, he threw the shutout and Kluber is saved for 3-seed Yankees in next game. Indians outslugged them 11 hits to 4. Lindor has 2 of teams 3 doubles and Ramirez and Kipnis homered. While Kluber (PB-2-8) is not quite as dominant as his PB2-9 2017 card and the Yankees rookies are even better than our early season projection cards - Kluber had just enough to pull off a 7-3 win behind homers from Lindor and Ramirez The pen realy is weaker with Miller (PB2-7) and Allen (PB2-6), but for Padre Hand came in after Kluber gave up a leadoff homer in the 7th. Final Four from these 3 teams - Indians.

Kershaw delivered a big win for 12-seed Dodgers over 5-seed Cubs, but then Wood loses 3-1 to 4-seed A's. Lowrie had 2 of A's 6 doubles to chase Wood in the 5th and get to the amazing bullpen of Kelly and the closer Treinen. Final Four from these three teams -A's.

#8 Cardinals biggest home advantage as #9 Mariners slugger Cruz could only pinch hit in 4-0 loss. Carpenters 2-run homer in the second put Cards on the road to a matchup with 1-seed Red Sox. However the Cardinals may have run into the best pitcher and best batter card from the 2018 stats in the next game. Chris Sale looks like the best pitcher card in the majors from this year's stats (PB2-9, hits only on 11-15) and he threw a 1-run, 1-hit game, while Mookie Betts (HR34-43, On Base Running and Stealing/Speed A, top defensive outfielder) doubled in Benintendi in the first then scored on back-to-back outs, then homered his next at bat to provide the 3-1 win. Final Four from these 3 teams - Boston Red Sox.

10-seed Atlanta jumped up 2-0 after Acuna singled to start the game, stole second and went to third on a wild pitch before Camargos RBI single. Yelich's homer made it 2-1, but Suzuki's RBI double made it 3-1 and closer Vizcaino survived a 9th inning double and run scored by Moustakas to get a showdown with 2-seed Astros. Atlanta then became the only NL team to make the Final Four in this single game elimination when they jumped on both Verlander (PB2-8) and closer Rondon (PB2-9) for homers by thier two top of hte line-up sluggers Albies and Acuna. Meanwhile Sanchez (strong PB2-7) and closer Vizcaino (PB2-9) scattered 8 Astros hits with the help of one run-saving diving stop by shortstop Swanson off line-drive off the bat of Sprinter for a 6-0 win. Final 4 from these 3 teams: Braves.