Here are the recommended bracket picks with Villanova beating Virginia 61-59 in the title game. After the bracket see explanations and 8 other methods for making picks (none of Wednesday's injury upsets should change picks due to strong back-ups as Houston's VanBeck 2.34 Value Add and IL-Chic's Dixson 0.00 are out, while Kansas' Azubuike 6.53 is questionable). We covered Hunter Tuesday by updating injuries here. Three years ago the Washington Post noted I rated Justin Anderson as indispensable to UVa's run, but this year they are deep enough to potentially make the run with Hunter out.

Bracket
(a decimal.5 after a number can be ignored, but it indicates it was a very close call and the team could be given one more win than indicated. The first number to the right of the team is the composite recommendation, with the other bracket scenarios given as further options.)

See Injury Updates from Tuesday 11 p.m. which results in adjustments below. Injuries to Miami, Duke, UNC, and Virginia could result in extra wins for Loyola, Michigan State, Michigan/Gonzaga and Kentucky/Arizona (respectively).


The 2018 Value Add bracket based on www.valueaddbasketball.com projects Villanova over Virginia for the title with Duke and UNC also in the Final Four. All bracket picks appear at the top of this blog. (Photo above from CBS Sports 247 site showing Nova star Mikal Bridges.)

However, variations listed in the other numbers under each heading of the table project Arizona and Ohio State to join the Final Four if it comes down to the best dominant three-player comb on the court (third number left of each team by each team). If it comes down to the most NBA talent (fourth number left of each team) then Duke over Kentucky could follow a Final Four with Villanova and Gonzaga. Michigan is the hottest team (third number from the far right), and Kansas has the best-experienced guard play for a Final Four run (2nd column from the right).

The main system clinched a victory over President Obama's (who knows his basketball) last bracket by the Elite 8 in 2016. In 2017, the Value Add All-Americans hit the 99th percentile by picking the Gonzaga vs. UNC championship game.

That being said, the 2015 bracket was a disaster, and everyone from Nate Silver to the casual fan knows that one of the many fans who take wild guesses will stumble onto wins that neither Nate, me or any basketball expert would logically choose.

Here is the story at John Dodds' 247 sites for CBS Sports as we unveil the bracket predictions at the top of this blog.

While some have credited following my picks for winning their brackets, I accept no responsibility for anyone following these picks and being destroyed in their pool :-) Like a stockbroker warns - past results do not guarantee future performance.

Nonetheless, here is the comprehensive breakdown of the factors we consider and the links to further explanation on each.

Those numbers above are based on consideration of these factors:

The total composite (1st column left of the team) Value Add projection based on all of the below is for Villanova over Virginia, UNC and Duke also in Final Four. The variations based on components are:

1. Value Add adjusted for Injuries/Returning Players (2nd column) - By far the most important single factor is ... how good the team on the floor is today. This starts with a fraction of the www.kenpom.com rating and uses Value Add to increase that rating for returning players (e.g. Michael Porter Jr. for Missouri) and subtracting for players injured with strong replacements (Auburn, Clemson, and Nevada hardest hit). Based on this the final would be Virginia over Villanova with UNC and Duke in the Final Four.

a. Upsets (5th column left of the team). This is a variation on above, except it takes a chance on the worse seed whenever they are within one point of the favorite in the Value Add Adjusted for injuries. Villanova over Virginia with Duke and Michigan in the Final Four.

2. NBA Talent.  (4th column left of the team) Duke over Kentucky, with Villanova and Gonzaga in the Final Four.

3. All American/Top 3 dominant players (3rd column left of the team). See also the original All-American Announcement). Villanova over Arizona with Duke and Ohio State in the Final Four.

4. Upset Mismatches. (6th column left of the team) Chances for upsets due to one of these three areas of mismatches; Three-point Shooting, Steals or Offensive Rebounding. A lot more first-round upsets, but still Virginia over Villanova with Duke and UNC in the Final Four in the end.

a. Coaching (furthest column right). Villanova over Virginia with UNC and Duke in the Final Four.

b. Experienced Guards (2nd column from right). Virginia over Villanova with UNC and Kansas in the Final Four.

c. Hot Teams (third column from right). Virginia over Villanova with Duke and Michigan in the Final Four.

To go beyond the Final Four scenarios spelled out by each method, the number by each team in each scenario indicates how many times you should write in the team name. For example, the top team listed Virginia is either the National Champion (6 lines) or Runner Up (5 lines) in all but two scenarios. In these two scenarios, Virginia would lose after two games to either Arizona or Kentucky. If it comes down to the most dominant trio on the court they would lose to Arizona (whose top three players are better than Virginia's top three players), and if it came down to the most future NBA talent dominating then they would lose to Kentucky after two wins. 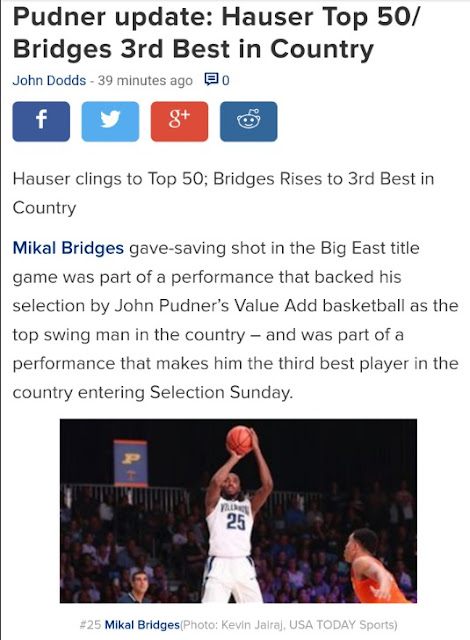 Posted by JohnPudner at 9:42 AM