This blog breaks down all four double header of games played in the West Region, which are the games that appear in the lower left corner of brackets. It shows the top 10 players on the floor for each of these double headers, and gives details on which factors give advantages to which teams.

Gonzaga wins this bracket based on all 10 factors, though many observers are picking Arizona to beat them.  The system that analyzes the way teams match-up on steals and three-pointers projects Virginia as the Eastern Champion. This

Salt Lake City 1st Two Rounds
West: No. 1 Gonzaga vs. No. 16 South Dakota State
West: No. 8 Northwestern vs. No. 9 Vanderbilt

Healthy: Northwestern’s Dererk Pardon would have also ranked in this top 10 if he had been with the team the entire season.

South Dakota State’s last six games were against higher ranked teams, and it beat all seven en route to the Summit League title and improving more than 30 spots on the rankings at www.kenpom.com.


Possible “style/home” edge upset: Gonzaga so good on both offense and defense on steals and 3-pointers that it’s hard to see an upset, even though Salt Lake is a relatively neutral site.

Possible “style/home” edge upset: Bucknell can hit threes (55th best), but turns the ball over a ton (310th best at protecting the ball), West Virginia has a huge edge (3rd in steals). Home edge for Princeton heading into Buffalo snow – on rail perhaps?

Healthy: Xavier’s Edmond Sumner would have been in top 3 in this bracket if he was not injured.

Possible “style/home” edge upset: Big style edge to VCU in opener as VCU just doesn’t allow 3-pointers (28th best in denying them) that Saint Mary’s relies on (14th best in country) while VCU (28th in steals) can take advantage of the fact that Saint Mary’s is terrible at protecting the ball (229th). If VCU and Arizona win, Arizona has the huge advantage in the home court to their north and the fact that they do NOT turn the ball over (26th).

Vanderbilt is the only team in the group with any future NBA players to go up against Gonzaga’s NBA talent. 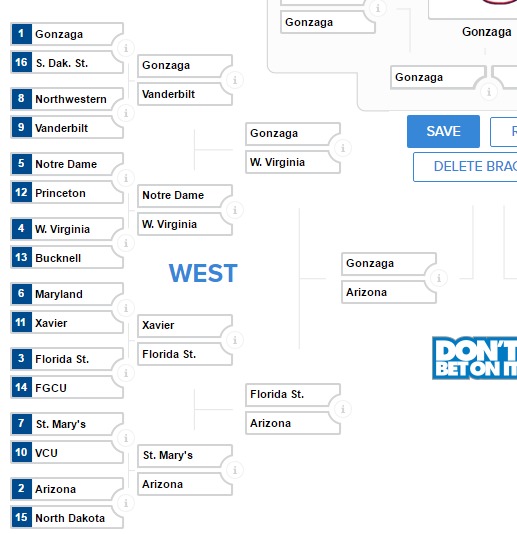