Statis-Pro Setup of Game with Greinke vs. Springer Sample Result

Here is how I set up the Statis-Pro baseball game, showing a game I just played between the Houston Astros and Arizona Diamondbacks that is in the game log. I actually show the components of both the traditional Fast Action Card version which I use for most games, but also the components to play the free dice version I use when I travel - which you can use if you do not have a fast action deck. 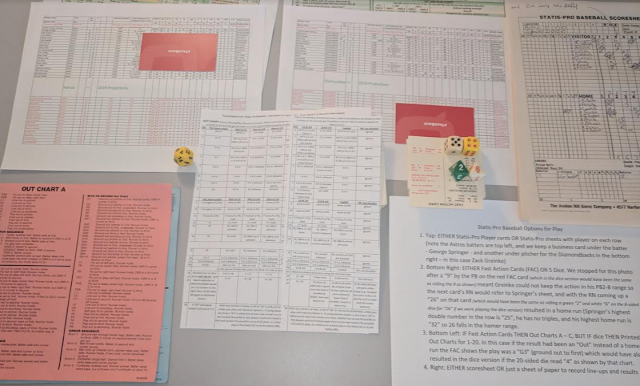 1.   Top: EITHER Statis-Pro Player cards OR Statis-Pro sheets with player on each row (note the Astros batters are top left, and we keep a business card under the batter - George Springer - and another under pitcher for the Diamondbacks in the bottom right – in this case Zack Greinke)

2.   Bottom Right: EITHER Fast Action Cards (FAC) OR 5 Dice. We stopped for this photo after a “9” by the PB on the red FAC card (which in the dice version would have been the same as rolling the 9 as shown) meant Greinke could not keep the action in his PB2-8 range so the next card’s RN would refer to Springer’s sheet, and with the RN coming up a “26” on that card (which would have been the same as rolling a green “2” and white “6” on the 8-sided dice for “26” if we were playing the dice version) resulted in a home run (Springer’s highest double number in the row is “25”, he has no triples, and his highest home run is “32” so 26 falls in the homer range.

3.   Bottom Left: IF Fast Action Cards THEN Out Charts A – C, BUT IF dice THEN Printed Out Charts for 1-20. In this case if the result had been an “Out” instead of a home run the FAC shows the play was a “G3” (ground out to first) which would have also resulted in the dice version if the 20-sided die read “4” as shown by that chart.

4.   Right: EITHER scoresheet OR just a sheet of paper to record line-ups and results