To play Value Add Basketball Game using these Fast Action Cards instead of dice, click on each of the 24 PDFs below and print them out. The best next step is to print them front and back on card stock, making 12 sheets of paper, and then cut each sheet into 6 two-sided cards.

1. Shuffle the cards and place them in a stack.

2. Flip over the first card, and use the first two lines, which replace the two 6-sided dice in the top line, and then replace the 8-sided dice on the second line to determine who gets the ball (e.g. the top left card shows a "PG (1)" so the point guard would get the ball. The second number on the same card replaces the 11-66 range, so an 11-36 appears on the defenders card (the "31" on that card is a possible steal), while a 41-66 refers to the card of the player with the ball. If nothing happens in the 11-66 range, then go to the next number on the same card for the 1-20 roll to determine if the player made a shot, missed, or was fouled.

After reading those three numbers on the same card, flip again. If a shot was made, then go through the next card with the same three numbers on the opposing teams cards. If player was fouled, then flip the next two cards to see if the 1-20 third number on the card is a made or missed free throw. If a shot is missed and the scoresheet possession is shaded to indicate you need to check for the rebound, then the new cards tells you the player trying to get the rebound and if the 1-6 number that follows his position gives him the rebound (e.g. if the top right card were the second card and flipped to determine the rebound, then the "Reb to Off PF if 4 in range" indicates the offensive power forward would get the rebound if his Off Reb were 1-4, 1-5 or higher. If his range was 1-1, 1-2 or 1-3, then the defensive Power Forward would get the rebound. 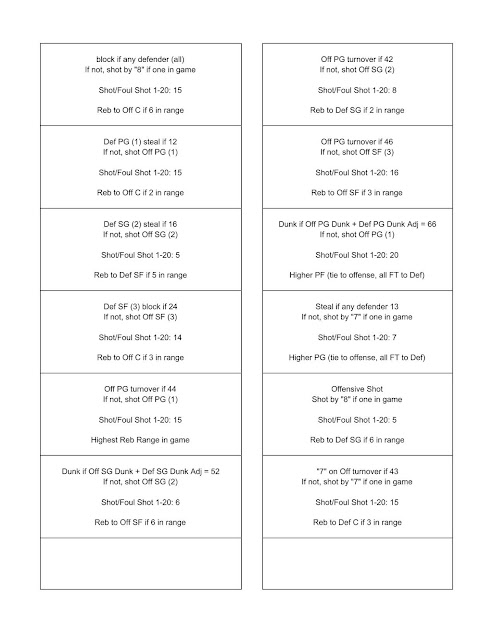 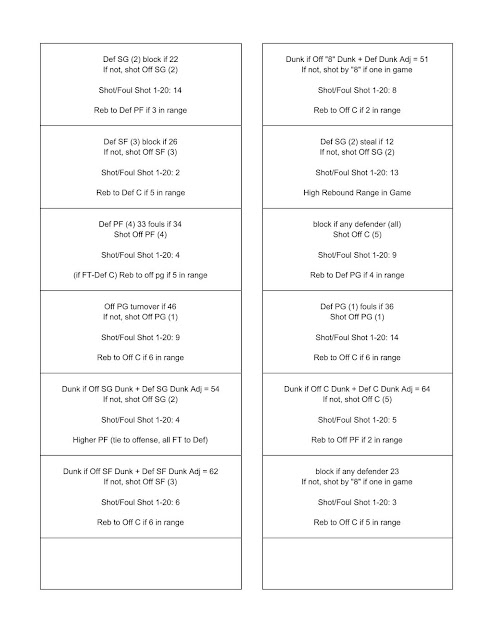 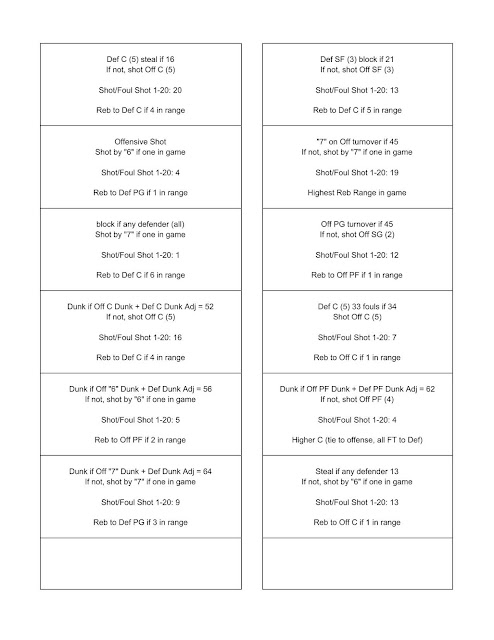 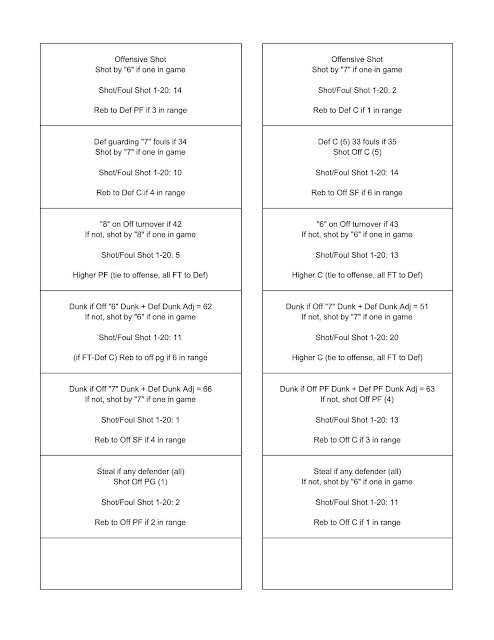 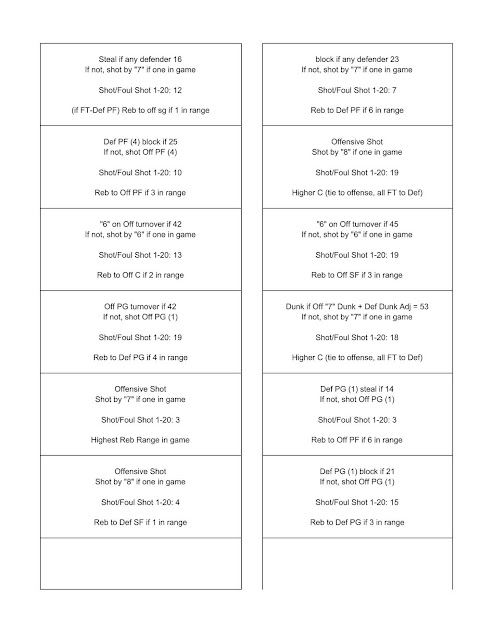 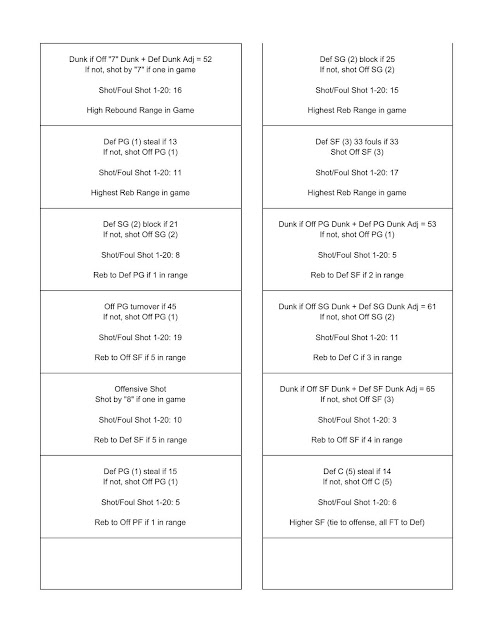 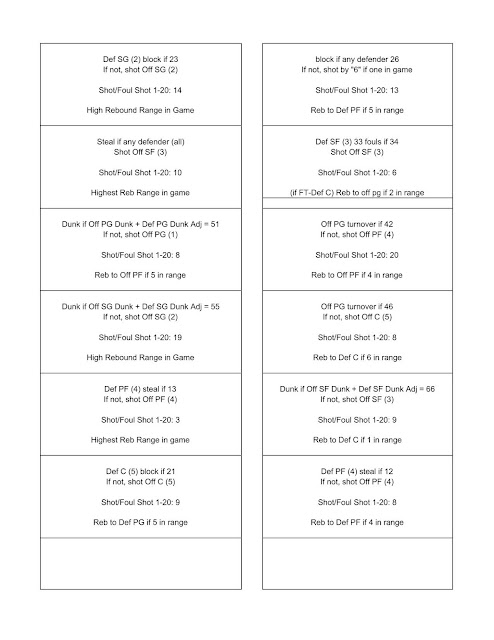 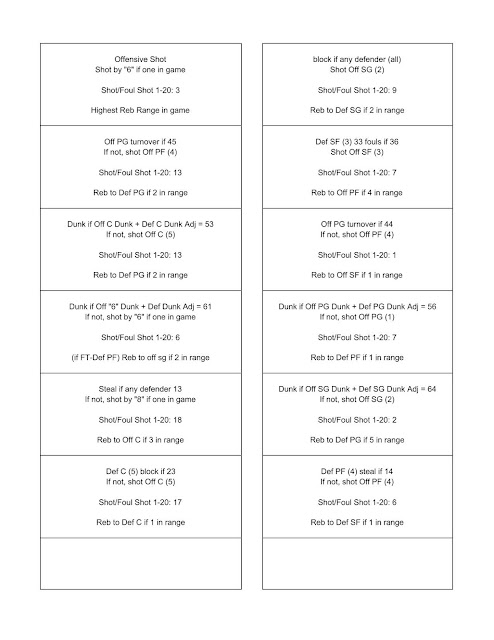 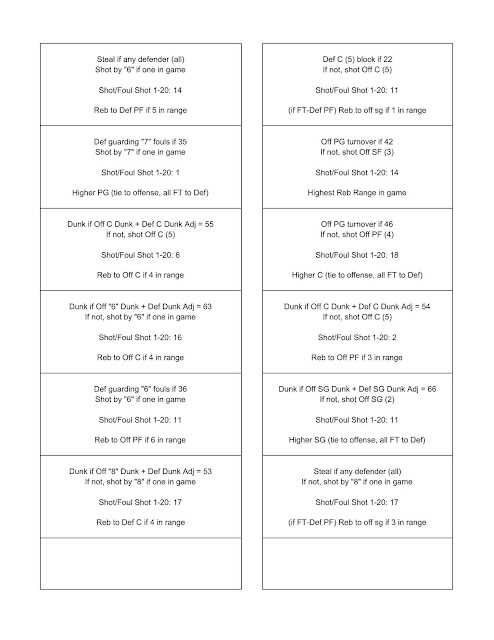 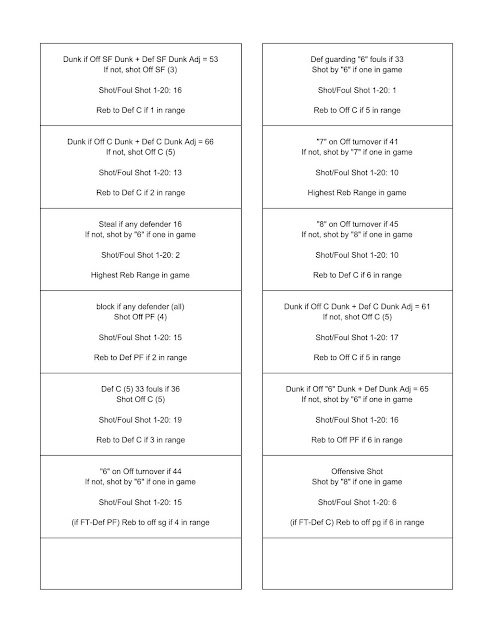 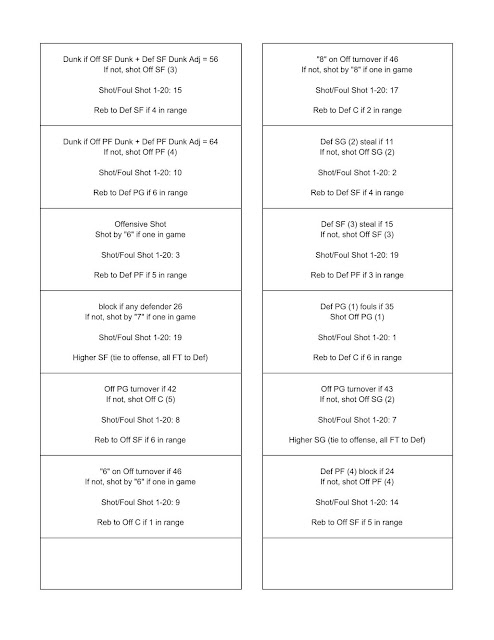 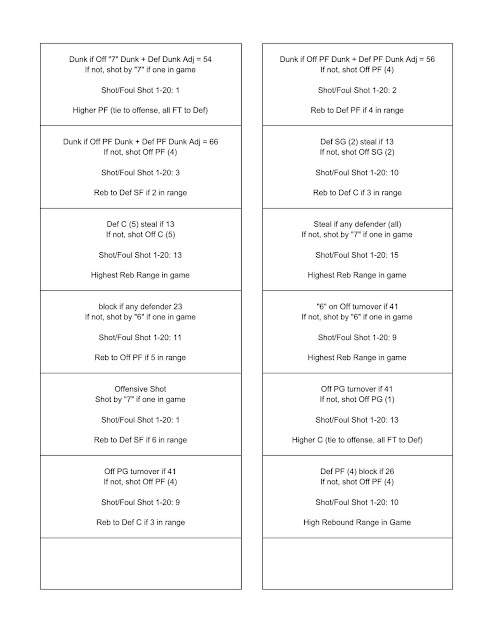 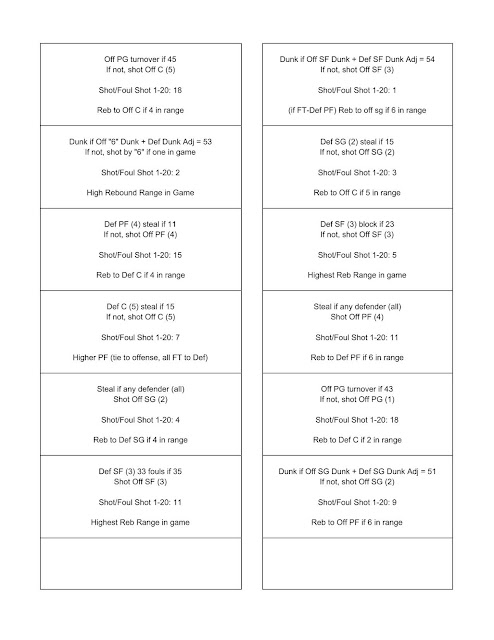 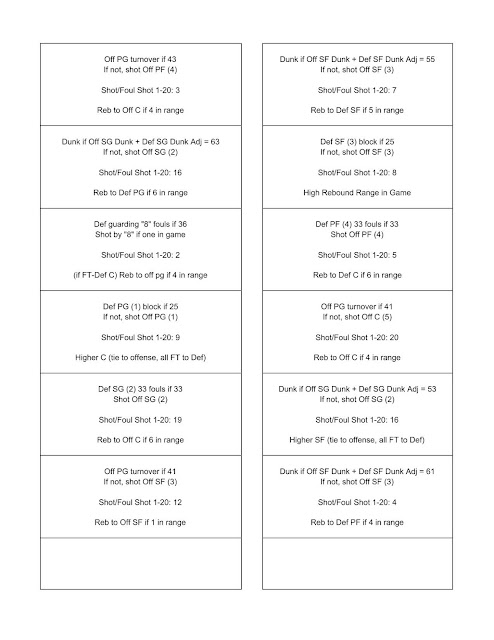 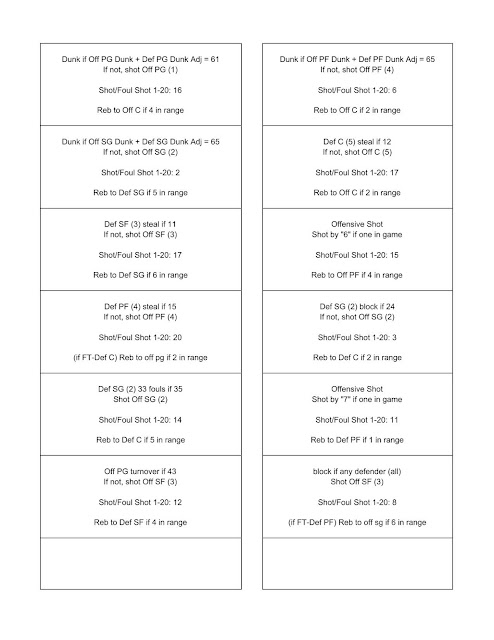 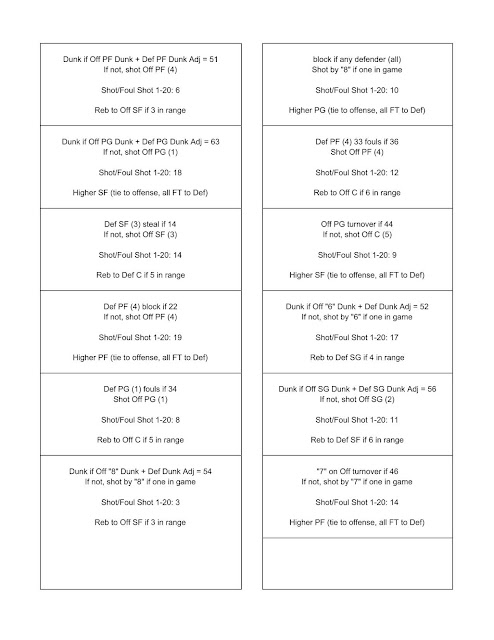 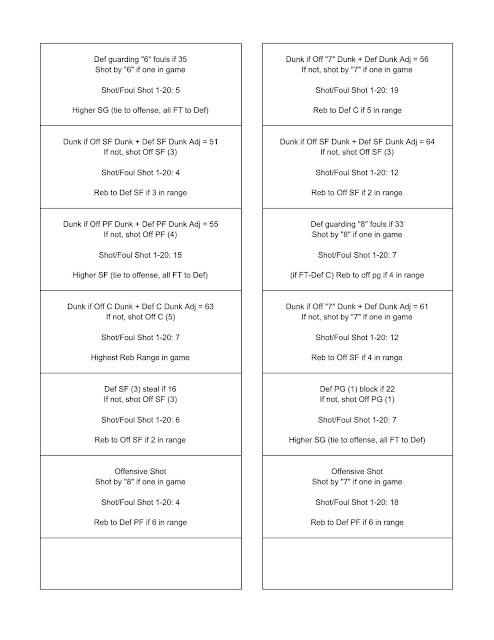 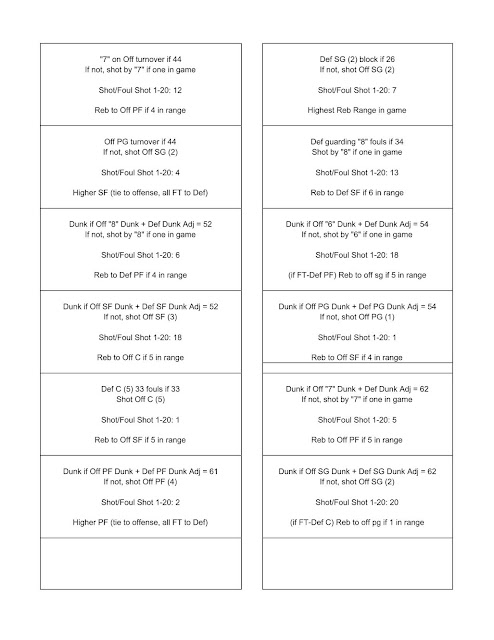 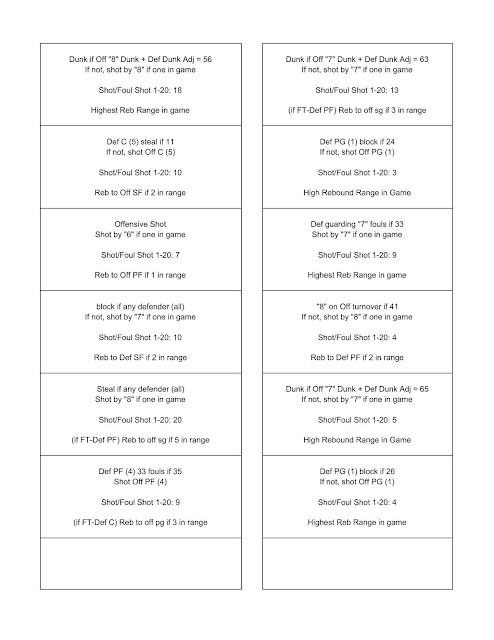 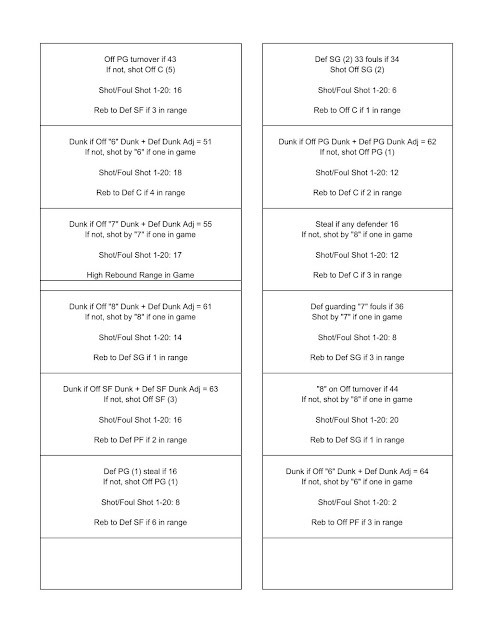 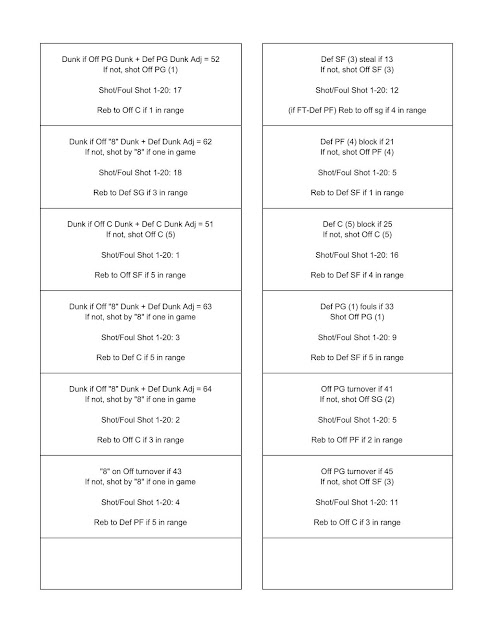 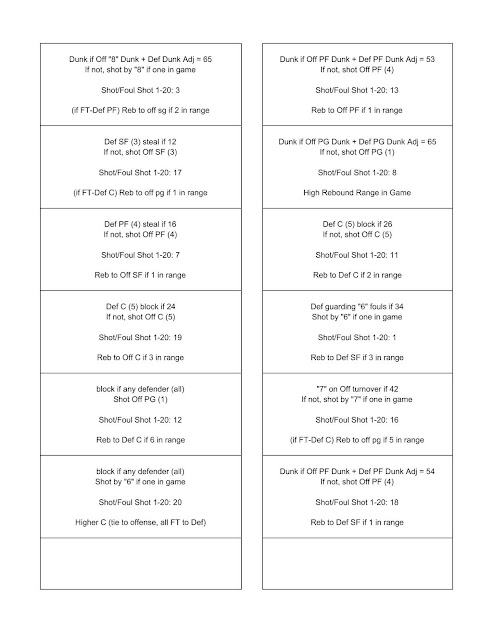 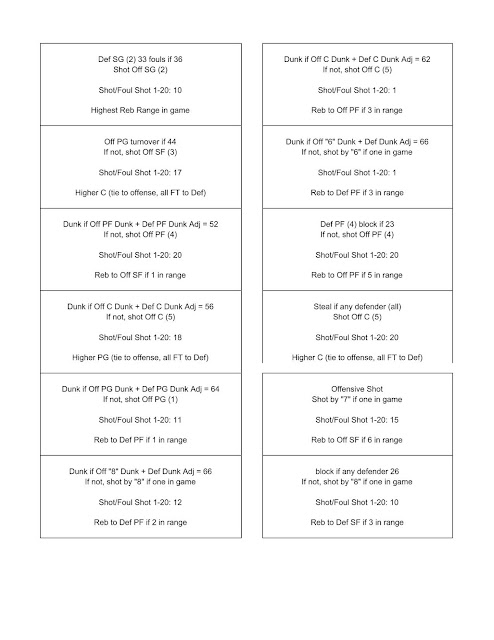 Posted by JohnPudner at 3:26 PM