This year the top three players in the country based on our www.valueaddbasketball.com calculations and those of Sports Reference's Win Shares are identical. Jock Landale is first in both (11.48 points above replacement Value Add and 7.5 Win Shares) followed by Deandre Ayton (Arizona, 11.07 and 6.1) and Gary Clark (Cincinnati 11.05, 6.1). Also see CBS Sports 247 site story here. 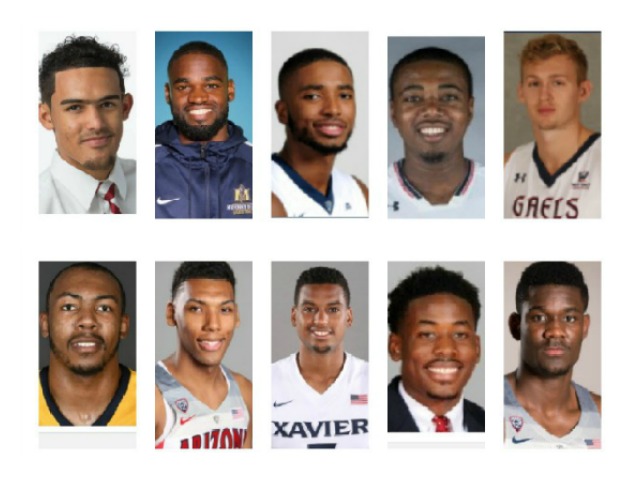 Here are the notes on the 1st, 2nd and 3rd team All-American units based on the Value Add ratings and positions identified at www.kenpom.com for 4,000-plus players, and any updates will be added to www.pudnersports.com.

PG - Trae Young (Oklahoma, top left)  - led Value Add for most of the year and still the best of three incredible Big 12 guards, While the Seth Curry shooting comparisons all year were justified for his insane long three-pointers, the most incredible stat is that he assists on 49.9 percent of all baskets scored by his teammates on the court and that he is so hard to guard he draws 7.6 fouls per 40 minutes on the court.

SG - Jonathan Stark (Murray St. , top second left) is fourth in Win Shares at 6.1 and ranks as a 1st team All-American as the best Value Add of any shooting guard at 8.44. Despite playing more than 92 percent of all minutes, Stark doesn't seem to tire as an excellent passer (assists on 23.4 percent of teammates field goals), while hitting 90 percent of his free throws, and 42 percent of his three-pointers to lead Murray State to a 24-5 mark.

SF - Mikal Bridges (Villanova, top center) is the perfect swing player at the three spot with Dwyane Wade-like ability to block 3.5% of all opponents shots and steal the ball 2.8% of all opponents trips, but also step out to the arc often to his 70 three-pointers at a blistering 42 percent pace.

PF - Gary Clark (Cincinnati, top 2nd from right) defensive rating of -4.49 means he single-handedly takes away 4.49 points from the opponent per 100 trips down the court, the third best in the country behind Mohamed Bamba (Texas) and Isaiah Wilkins (Virginia). And when he does have the ball, www.kenpom.com rates him as the 11th most effective offensive player in the country.

C (and Player of the Year, top right) - Jock Landale (Saint Mary's) is not only the best player in the country based on his 11.48 points above replacement player at www.valueaddbasketball.com, but also easily the best in the country based on his 7.5 Sports Reference's Win Shares (second place is 6.1). His 260 made two-pointers is 49 more than the second best - Ethan Happ of Wisconsin at 221, and he hits them at a 65 percent clip.

PG - Jevon Carter (West Virginia, left photo on bottom) leads a ferocious defense that turns over the opponent 23.8 percent of their trips down the court, second only to Stephen F. Austin as a team and Carter is 11th in steals at 4.7 percent of opponents trips down the court. Third in Value Add at 11.05 points per game above replacement.

SG - Allonzo Trier (Arizona, second left photo on bottom) faces heavy defensive focus to hit 43 percent of his three-pointers, 65 percent of his two-pointers and 85 percent of his foul shots. A nearly unstoppable force, and if he and Ayton are on the court for the tournament Arizona is very tough. However, they are not deep, so if either is missing it will be hard to make a run.

SF - Trevon Bluiett (Xavier, center bottom photo) make Xavier one of the few teams to get great numbers from the "3," or small forward spot this year. While most teams rely on point guards and big men - the two extremes - Bluitt is apple to step back and hit 43.4 percent of his threes and get to the rim from the toughest position on the court and then convert when fouled (126 of 150 free throws for 84 percent) to give Xavier the balance for the seventh best offense in the country according to www.kenpom.com.

PF - Yante Maten (Georgia, second photo from right on bottom) was on course for a 1st or 2nd team All-American pick last year until a late-season injury, and this year he is one of only five players worth more than 10 points per game above a replacement (10.44) and only slips to the second team because Clark also plays power forward.

C - Deandre Ayton (Arizona, bottom right photo) blitzed Oregon on the road Saturday for 11 of 14 shooting, 28 points, 18 rebounds and five blocked shots to move all the way into second place at 11.07 points above a replacement player at www.valueaddbasketball.com. Unfortunately for him, the first place guy is also a center, so he is on the second team.

PG - Devonte' Graham (Kansas) went into #6 Texas Tech Saturday and dominated to give Kansas a ridiculous 14 straight Big 12 titles. He might be the Big 12 player of the year, but unfortunately, the two other players vying for that title are Young and Carter. The only thing we can say for sure is that the best point guard in the country is from the Big 12, but right now the other two have a slightly higher Value Add to nudge Graham down to the third team - but they could go in any order.

SG - Jerome Robinson (Boston College) is one of the few dominant shooting guards in a game now dominated by point guards, centers, and to some degree power forwards - the 1,4 and 5 spot. Robinson hits 45 percent of this three-pointers, 55 percent of his two-pointers and has hit 84 percent of his free throws while getting to the line a lot for the "2" position (140 of 253). He played all 40 minutes (or more in overtime) in 9 of 16 ACC games and left it all on the court in Miami this weekend with his epic 12 of 17 shooting performance that fell one point short.

SF/PF (tie) - John Konchar (Fort Wayne) and SF/PF (tie) - Dylan Windler (Belmont) - Pomeroy listed two players who split time between Small Forward and Power Forward, and they were so close in Value Add (8.36 and 8.11) that we rated them a tie for the last spot. Windler is the latest in great Belmont shooters (43 percent from behind the arc and 67 percent from inside), while Konchar has unique talents as a player who can play power forward but also assists on one in four baskets made by his teammates and is one of only 21 players in the nation to steal the ball four percent of opponents' trips down the court.

PF - Keita Bates-Diop (Ohio St.) did not sit a minute in the two-point overtime win at Indiana this weekend in which he scored 24 points, grabbed 14 rebounds, added four blocked shots, four steals, and even two assists to improve his Value Add to 9.97 points above replacement, the seventh best in the nation. I know Miles Bridges and Ethan Happ came in as likely Big Ten Players of the Year, but it has really been Bates-Diop who deserves it in leading Ohio State to a surprise 15-3 mark to tie Purdue for second in the conference.

C - Dean Wade (Kansas St.) gives the Big 12 a center with the sixth best Value Add rating in the country at 9.98 points per game above a replacement player to go along with the three best point guards in the country. At 6-foot-10 Wade is a match-up nightmare because he drops behind the arc three times a game and hits 42.4 percent (36 of 85). He also steals the ball more than three times as often as the first and second team All-American centers above (incredible 2.8 percent of opponents trips down the court) and also blocks 3.2 percent of opponents shots.

Feel free to call John Pudner at 404.606.3163 or email pudnerjohn@gmail.com with any questions. For anyone getting this email who did not receive this email for the past five Value Add All-American basketball teams, feel free to repost this information. The Value Add Basketball season lauded by many national sports outlets for pinpointing player values. (See past All-American teams by clicking here - 2017, 2016, 2015, 2014 and 2013).

It may be you opt for subjective observation for players like Miles Bridges, whose Value Add was held down by not needing to score a lot of points while facing a very weak December schedule of teams ranked and still only being MVP in one of those first 15 games according to www.kenpom.com. Likewise Shamorie Ponds, who put up fairly week numbers until he destroyed Duke and Villanova in back-to-back games. Both of these players have played at an All-American level down the stretch and might be they are "better" than others on our list - we can only tell you they were not as "valuable" over the course of the season.

Here is a list of near misses. In some cases, the players below could have been listed above except they missed games - especially Notre Dame's Bonzie Colson who has a chance at National Player of the Year until he was injured in the 13th game. In other cases, a player was in the top 15 at www.valueaddbasketball.com but had three players at his position ahead of him.

Posted by JohnPudner at 2:19 PM