Bonnie's HoF Lanier Not Enough for Maryland's trio of Branch, Bias and Coleman

With the Bonnie's off to a great start this season, we put their great 1970 squad on the court.

Bob Lanier did not disappoint with a 25 point, 11 rebound performance but no other Bonnie in double figures, but Maryland won with incredible balance. All 5 Maryland starters scored between 12 and 14 points. The Terps 1984 squad is one of the few on which all 5 starters can play all 44 possessions. (Keep in mind all 10 players are assumed to have played 11 possessions and scored 2 points to get to our 20-20 score for the starting point of the game.

In their real careers, Lanier would go onto be the No. 1 overall NBA pick and then have a Hall of Fame career. He took the Bonnie's to the Final 4, but did not play in it after he was injured in the Elite 8 game - leaving Bonnie's fans to wonder if this would have been a national championship team.

Maryland won the ACC title behind a front line all destined for the NBA, but Len Bias did not follow Ben Coleman and Adrian Branch to the league due to dying of a cocaine overdose 2 days after he was the No. 2 overall pick by the Celtics in the 1986 draft. 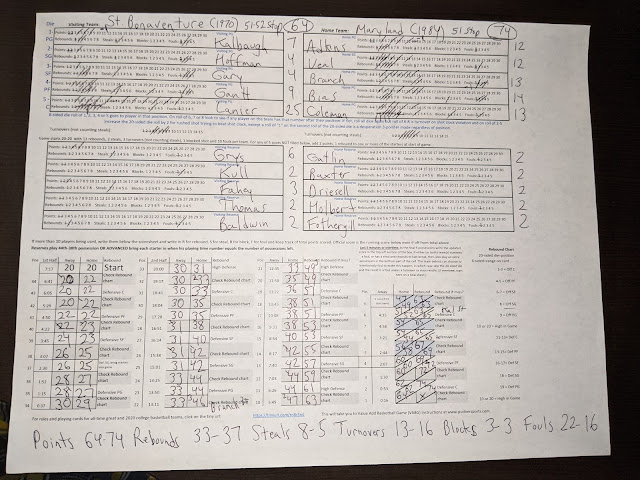