The 2020 Statis-Pro playoffs are set. Here are the brackets, and the playoff game results will be filled in below, while the final regular season update is here. The first 4 series will be best-of-5, and the second series and beyond will be best-of-7 series. If you do not own a Statis-pro baseball game you can try it by clicking on the free version and the so e preliminary player cards and score sheet for each of the 30 teams, which now includes cards for all 30 teams based on Zips projections. 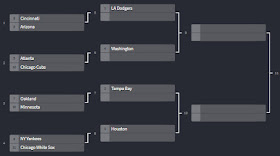 Pitching rest rules for playoffs. Starter must rest 3 games (4-man rotation). A reliever must rest if he pitches to more than 5 batters BUT if he only pitches in one inning he does not need to rest. However, if he pitches in 2 straight games he just rest a game not matter how few batters he faces. If a reliever faces at least 12 batters then he must rest 2 games.

Wow, both leagues have a series go to extra innings in decisive 5th game.  In the other 2 series, should have great TV ratings with the Cubs and Yankees advancing :-)

A brilliant pitcher's duel, scoreless until the 7th when Eduardo Escobar launched a solo HR. Madison Bumgarner comes up big again with 8 shutout innings. But he runs out of gas and they have to go to their new young closer. Ginkel gives up a double, error, sac fly and Reds scratch out a run, 1-1 going to extra innings. Arizona looks good again when Nick Ahmed rips an RBI double in the 11th, 2-1 D'backs. But Reds' fans favorite new player Nick Castellanos comes through with a clutch 2-run double to walk off the series. Reds win game 3-2 in 11, and take series 3-2. Next is NLDS vs. Washington.

Rich Hill pitched 8 2-3rds shout-out inning, allowing only 4 baserunners until Mark Canha homered to tie the game 1-1. With both PB 2-9 closers still in the game for the 10th, fielding made the difference. Buxton singled, the Sano's drive in the gap appeared to be a double only to have A's center fielder make a clutch defensive play to cut it off and hold him to a single and preserver the lead. Hendriks then struck out Donaldson and Cruz to end the inning.

In the bottom of the 10th the A's Piscotty led off with a grounder to shortstop but Arraez threw it away (we do not start a man on second base in extra innings in the playoffs like the regular season). Twins closer Rogers then walked, and due to the lefty v lefty Kemp laid down a rare sac bunt to put runners on 2nd and 3rd with one out. The speedy Orf pinch ran on 3rd base. Semien, who had singled the three previous at bats, hit a grounder to third and Orf beat the throw home to give the A's a comeback series win - not only trailing until the last out but also winning three straight after being down 2 games to 0.  Laureano was MVP for the series, with 11 hits in 22 at bats, including 5 doubles and a Homer in addition to the clutch defense.

After those two thrillers, the four best-of-seven series are set:

Oakland won to force a decisive Game 5 with 5 homers and 5 doubles in the first 5 innings alone. The first two batters, Semien and Lauren, both homered and doubled as the piled up a 12-0 lead through 4 1-2 innings. Montas, who was ejected from Game 2 after just one batter, came back to throw 7 2-3rds innings to save the bullpen for Game 5. Series tied 2-2 and heading back to Oakland - visitors have won all 4 games.

After a 1-1 start through the 4th, Stephen Vogt smacks a 2-run HR. The next inning Christian Walker hits a clutch 3-run HR and it is all over. Merrill Kelly with a surprisingly strong 8 innings as Arizona rolls 6-1. Series tied 2-2.

AJ Puk delivered the all-time clutch performance with 1-hit ball for 8 innings, and Chapman reached 3 times, scoring twice and adding an RBI double as Oakland took a 4-0 lead into the 9th. Laureano misplayed Sano's 9th inning drive into an RBI double to make it 4-1, forcing closer Hendriks to nail down the win. Hendricks will need to sit out Game 4 due to pitching in consecutive games, however three other strong relievers can pitch for the A's AND No. 2 starter Montas can start Game 4 since he only pitched to one batter before he was ejected in Game 2. This also means the normal No. 4 starter gives and extra long relief lefty in game 4 as well. Twins still lead 2 games to 1.

First upset of the 2020 playoffs. The only sub-500 team, ranked last in runs scored, the Cubs sweep the Braves. 🧹 ⚾️ Willson Contreras goes 6-9 with 3HR's in series. He helps Chicago erase a 4-run deficit and roll to a 9-7 win to clinch the sweep. It will be Cubs vs Dodgers in NLDS.

LeMahieu singled and scored in the 5th, then doubled to key a 2-run 5th of keuchel to finish as a series co-MVP as the only player in the series on either team 5 hits. The Yankees out up 24 hits and 16 runs in the last 2 games but only scored 2 runs in Game 1. They only won that game 2-1 because Cole allowed only and unearned run in a complete game with 14 strikeouts and only 3 hits and a walk allowed. The Yankees sweep the series 3-0 and will face the Astros with Cole vs. Verlander in Game 1.

Mr. Clutch, Eugenio Suarez with an RBI single in the 6th, breaks a 3-3 tie. The Reds bullpen barely holds on (2 bases loaded jams) and they win 4-3. Cincinnati leads series 2-1.

When A's starter Montas was ejected for arguing balls and strikes in the first inning, Fiers came in for 5.2 scoreless emergency innings to give the A's a 2-0 lead going into the 7-8-9 relievers. However Donaldson homered in the 7th to pull the Twins within 2-1. Set up man Diekman then could not get an out in the 8th, allowing singles by Rosario, Polanco and Garver before walking leadoff many Buxton to tie it 2-2. Closer Hendriks came in an almost bailed him out with a strike out and foul out, but Donaldson's 2-out, 2-run single was the game winner. Twins lead 2 games to none.

Luke Weaver is the story with 7-shutout innings. Katel Marte with a solo homer and Nick Ahmed RBI single. Reds load the bases in the ninth but no magic this time. Arizona wins 2-0. Series tied 1-1.

Cole threw masterful complete game allowing 1 unearned run, 14 Ks, 1 W, 3 Hits to outfield Giolito. LeMahieu had 3 of the 8 hits in the game including an HR, and Voit greeted closer Frye with a sac fly for the final margin. Yankees lead 1 game to 0.

22 of 49 Twins reached base, including all 9 batters at least once and Donaldson his first 5 times for the 7-4 win. Rich Hill and three relievers allowed no earned runs to Oakland, but four A's errors on the left side of the infield led to 4 unearned runs - all in the first inning. Minnesota leads 1 game to 0 and is looking for extra fielding practice before Game 2.

Reds lead 2-0, then Akiyama with huge error in 8th leads to big inning and Arizona takes 3-2 lead. But All-Star game MVP Eugenio Suarez smacks a 2-run HR in bottom of inning and Reds go on to win game 1 by a final 4-3.

In the AL, five of the six teams to make the playoffs were in the top 6 in the actual standings at the time - only the Cleveland Indians did NOT make it and the New York Yankees did make the Statis-Pro playoffs. In the much more balanced NL, the three teams actually leading the NL divisions all made the Statis-Pro playoffs - the LA Dodgers, Chicago Cubs and Atlanta. However, the three teams clinging to second place in real play (San Diego, St. Louis and Philadelphia - were replaced by the Reds, Diamondbacks and Nationals. 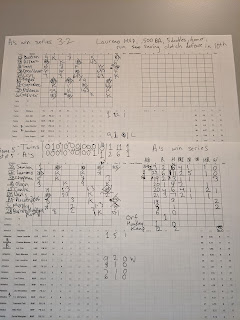 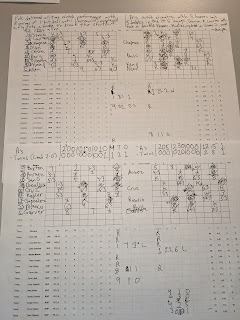 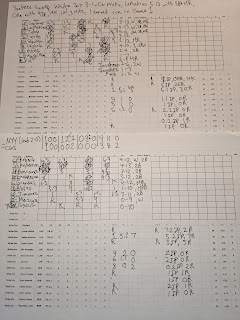 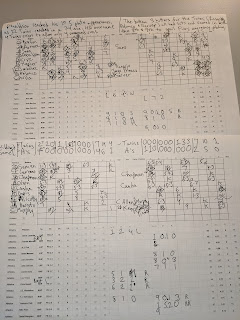