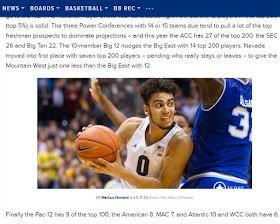 What a 24 hours for basketball! But before we run through why LeBron James (who will always be tied to our Dwyane Wade) takes the court tonight at Golden State having passed Michael Jordan as the most valuable player of all time, let's talk about what happened just before the midnight deadline for players to return to their colleges rather than stay eligible for the NBA draft in three weeks ...

At 11:33 p.m. ET last night, Cody Martin tweeted that he would return to Nevada, and at 11:34 his twin Caleb Martin confirmed he would stay as well - beating the Midnight deadline for players to leave the NBA draft t return to school. Kentucky, Villanova, Tennessee, Maryland and Virginia Tech were not so lucky, losing players to drop in the www.valueaddbasketball.com top 25.
However, Kentucky's replacement players were so good that they actually remained the No. 3 team in the nation. Duke passed them for No. 2, but Villanova fell from No. 2 to No. 10 - with Kansas rounding out the projected Final Four. Here is the top 25 with notes on teams that lost players to the NBA once and for all at Midnight.
Team   Top 8 Value Add
1.   Nevada   52.98 – Cody and Caleb Martin announced return at 11:33 pm to keep them at No. 1 with 52.98 combined Value Add.
2.   Duke   46.65
3.   Kentucky   stayed in third despite 241st Vanderbilt (5.17) & 272nd Gabriel (4.93) dropping but being replaced by almost as good 9th and 10th men (8.22 combined Value Add) as Villanova dropped further and Duke moved ahead of Kentucky’s 45.33
4.   Kansas   42.26
5.   Oregon   41.52
6.   North Carolina   40.31
7.   Mississippi St.   40.05
8.   Louisiana St.   39.18
9.   Auburn   38.66
10.   Villanova   dropped from 2nd after 25th ranked Spellman (8.01 Value Add) & 32nd DiVincenzo, (7.84) both left and replacements are a combined 6.85 to lower team from 47.51 to 38.51
11.   Gonzaga   37.94
12.   Tennessee   dropped from 6th after Alexander, 5.89 left and with (1.25 replacement) lowered from 42.01 to 37.37
13.   Syracuse   37.44
14.   North Carolina St.   35.07
15.   Indiana   34.95
16.   Virginia   34.62
17.   Texas   34.28
18.   UCLA   34.26
19.   Kansas St.   34.16
20.   Michigan St.   33.63
21.   Marquette   33.13
22.   Maryland   39.36 – dropped from 9th after 33rd ranked Huerter (7.82) left and only a 1.23 replacement to lower from 39.36 to 32.77
23.   Florida   32.73
24.   Iowa   32.49
25.   Arizona St.   32.1 (moved from 26th to 25th due to Virginia Tech dropping out)
Dropped Out - Virginia Tech   33.49 – dropped from 21st to 33rd after 381th ranked Alexander-Walker (4.25 Value Add) left with only 1.32 replacement Value Add to drop from 33.49 to 30.85
... now back to the inconvenient truth that LeBron James takes the court tonight as the GOAT, at least if that means the most valuable player in the history of basketball. Now that all of my friends in North Carolina and Chicago have stopped reading, let's walk through this.
As Golden State opens as a double digit favorite in the opener of the NBA Finals, Michael Jordan fans are likely to still be able to cling to their one argument for his superiority over LeBron James - six championships.
This ignores the fact that Jordan was one of THREE Hall of Famers playing at HOF levels (one of those years all three were in the top 15 in MVP voting) were on the 4th, 5th and 6th championship, and that argument leaves Jordan behind Robert Horry (7 titles), a legitimate contender for the greatest of all-time in Kareem Abdul-Jabbar, and many previous players who had more than six.
In this his 15th season, LeBron James was more than twice as valuable as Jordan was in his 15th and final season based on career Win Shares (the only way to truly compare players from different eras).
In fact, in his five seasons without Hall of Famer Scottie Pippen on the court with him, Jordan never even had a winning season, averaging just 30 wins and 52 losses. Jordan apologists complained when James went to Miami to likewise team up with a future Hall of Fame Player in Marquette's Dwyane Wade - but James did not need a Hall of Fame teammate to make his teams awesome - averaging a 51-31 record in the years before and after he and Wade teamed up.
So when they had to carry their teams without the help of another Hall of Fame player, James’ teams were 21 wins better than Jordan's teams.
It is also fair to note that while Pippen finished 5th, 7th and 9th in MVP voting three of his years with Jordan, and in one year Dennis Rodman gave Jordan TWO teammates in the top 15 in voting - only one season has LeBron ever had a top 9 teammate (Wade 7th, as his best player was prior to James' arrival). In short, Jordan never produced nearly the same results as Jordan EXCEPT when he had Hall of Fame support far superior to the poor cast James dragged to the NBA Finals some of his years.
The three years before Jordan arrived in Chicago, the Bulls averaged a 36-46 record. Jordan played three seasons before another Hall of Fame player arrived, and during his three years befoer adding Pippen Jordan's teams averaged the identical 36-46 record. Jordan scored a lot - but his team was no better with him until another Hall of Famer came along.
Compare this to the transformation of the Cavs after James’ arrival. The Cavs prior to James were far worse than the Bulls prior to Jordan, with a 17-65 record. For an apples to apples, they averaged 25-67 in the 3 years prior to James arrival (11 games worse than the pre-Jordan Bulls), yet in their first three years with James the averaged 42-40 for a 17 average improvement in wins to ZERO for Jordan.
Jordan did not lead his team to a winning record until he was 25 and Pippen had arrived - but by age 25 James finished his seventh season having taken his Cavs to an average mark of 50-32 before leaving to Miami to team up with a player almost at Pippen’s level in Wade.
The difference continued throughout their careers. In the years before or after James and Jordan left and arrived, James’ teams averaged being 22 games better with him than without him and Jordan's teams did not improve at all until an extra Hall of Famer was added to the roster.
The dreadful Cavs improved 18 games as soon as the teenager James took the court. When he went from the Cavs to the Heat the Cavs lost 42 more games and the Heat won 11 more games. When he went back to the Cavs they won 20 more games and the Heat lost 17 more, for an average of 22 more wins a season with than without James.

Contrast this with the amazing lack of difference Jordan’s departures and returns made. When he arrived from UNC he made the Bulls one game worse at 27-55, and as noted did not improve them one game over his first three years. When he took the 1993-94 season off the Bulls were only two games worse.

James critics will note that Jordan then came back for only part of the 1994-95 season, but he was there for the entire playoffs and the team did just as well as they did the year before without him - a loss in the Conference Semifinals. The next year they had a monster year - but remember that was only after adding a THIRD Hall of Fame Player in Dennis Rodman to the them.
And then Jordan played his final two seasons with the Wizards’ - his 14th and 15th seasons, but unlike James’ 14th and 15th seasons he was simply not very good, getting a couple of MVP mentions the first year and then having a nice farewell tour. The Wizards’ were 10 games worse when he arrived, and just as good the year after he left.


That means the only time a team was more than two games better the year after or before Jordan left was after the 1997-98 season - WHEN ALL THREE HALL OF FAME PLAYERS LEFT AT ONCE.

Jordan was an incredible leader of teams with other Hall of Fame players, and he knew how to close when his teammates were superior to all the opponents they would face. I will even grant that his three best seasons may have been slightly better than any of James' seasons.
However, James’ ability to take teams that should not be in the playoffs all the way to the NBA Finals time and time again is a much dramatic than Jordan’s ability to make sure his Hall of Fame teammates did not blow championships.
James passed Jordan and he is still playing strong.
Unless you want to argue that Horry is greater than Jordan because of the extra championship, it is time to admit there is a new all time King.